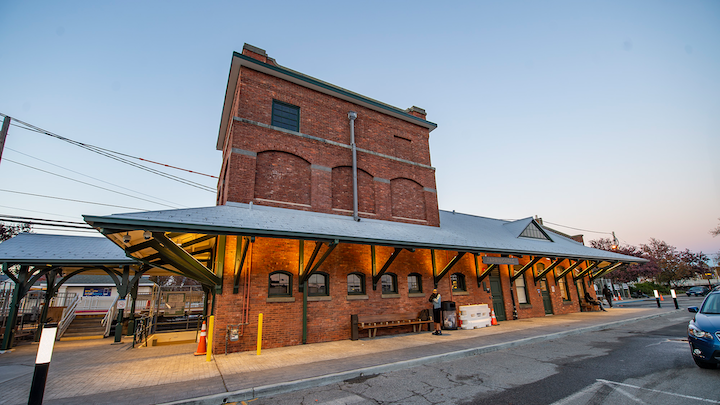 Upgrades to the Farmingdale Station on the Ronkonkoma Branch were completed in April 2019.
MTA Flickr

The LIRR Modernization Program, a comprehensive program of 100 projects to rebuild the LIRR and foster economic growth, made strides this past year with 14 station enhancements, five major bridge replacements and two grade crossing eliminations. While many of those projects were directly related to the LIRR Expansion Project, to build a third track from Floral Park to Hicksville, the accomplishments span across the entire LIRR system.

“The ability for the Long Island Rail Road to improve service for today’s riders while building for the future needs of Long Island is paramount. These expansion projects coupled with our LIRR Forward initiatives will give us the flexibility we need to provide more robust service and get our customers where they need to go on time,” said LIRR President Phil Eng. “Our operation and engineering staff and the entire LIRR workforce really worked hard to make sure projects were continued with as little interruption to customer service as possible and completed on time. We appreciate the patience of our customers and the communities that we serve throughout this critical work.”

“The LIRR Expansion Project is moving forward at a remarkable pace, and it is now about one-third complete, and is on schedule and under budget,” said MTA Chief Development Officer Janno Lieber. “This project is the model project for how we are changing the way we manage capital projects to do them better, faster and cheaper.”

The following capital projects were completed in 2019:

Bridges below 14 feet are especially vulnerable to over height vehicles striking them. In 2016, MTA says there were 20 bridge strikes in Nassau County alone. Each time a bridge is struck by a vehicle, speed restrictions are put on trains while a team of specialized LIRR personnel are dispatched to the scene to inspect the bridge to ensure its continued safety. Only when a bridge is determined to be safe for full-speed train travel is the restriction lifted; in the interim, the result is cascading delays that can affect train service across the immediate branch and sometimes other branches as well. Replacing low-hanging bridges improves the safety and reliability for both vehicles and LIRR passengers.

In June 2019, Cherry Lane Bridge, located in the Town of North Hempstead along the LIRR Main line, was removed and replaced with a taller three-track structure as part of the LIRR Expansion Project. The original low-hanging bridge had been in service since 1953 and the site of many accidents over the years due to trucks striking the bridge. This bridge was also replaced using the method successfully employed at LIRR’s Post Avenue Bridge in Westbury, which was completed over a single weekend in October 2017.

The Nassau Boulevard Bridge in Garden City was struck 16 times in 2018 and 2019 alone. The 11’ 6” bridge overpass was assembled in place adjacent to the site, and LIRR crews inched it into place over one weekend in October 2019, following the demolition of the old bridge as part of the LIRR Expansion Project. After the new bridge was firmly set in place, crews rebuilt the track atop the bridge, while reconnecting the existing two tracks. The 14-foot has a bay for a third track.

In November 2019, the LIRR installed new single span steel bridge structures at Accabonac Road and North Main Street Bridges in East Hampton, replacing two aging lower clearance structures. These low-hanging bridges, first constructed in 1895, were the site of many accidents over the years caused by trucks striking the bridges, resulting in train delays in both directions. The large bridge components, which were fabricated in Lancaster, Penn., were transported from Pennsylvania by road, then via barge through the Long Island Sound, around the tip of Orient Point, through the North and South Forks to Shinnecock Inlet, then via road again to East Hampton.

The 61-year-old South Tyson Avenue Bridge in the village of Floral Park was modified and a new two-track bay bridge was installed in September 2019 as part of the LIRR Expansion Project. It took 2,000 hours to construct and install the bridge which was replaced using a self-propelled modular transporter just like with Cherry Lane and Post Avenue.

The Flushing Main Street Bridge, built in 1913, in Flushing, experienced years of deterioration, and rehabilitation was necessary to the structure that carries two Port Washington Branch tracks over five lanes of vehicular traffic. Repairs were made to the steel composition and removal of loose concrete from the deck underside. A center median has been constructed beneath the bridge, providing safety for traffic flow. The work was completed in November 2019.

Work on the 100-year-old Springfield Boulevard Bridge in Queens Village was completed in August 2019. The replacement of the bridge, which is served by the Hempstead Branch, included repairs on existing concrete platforms, light poles and conduits, as well as limited underdeck concrete repairs.

Covert Avenue Grade Crossing in New Hyde Park was eliminated and reconstructed to provide a two-lane grade-separated underpass with a pedestrian sidewalk on the east side of the underpass as part of the LIRR Expansion Project. After crews removed the existing rail tracks and dug down 25 feet, the concrete box structure was moved incrementally more than 50 feet into perfect position. The roadway beneath the underpass was officially opened in October 2019.

The Urban Avenue Grade Crossing in the town of North Hempstead is one of eight street-level crossings that was eliminated as part of the LIRR Expansion Project. This new bridge installation, where there was no bridge before, eliminated the railroad crossing. The bridge was put into place using an approach called “box-jacking” that reduces the length of time the tracks must be taken out of service to just one weekend. In fact, the first time this method was successfully used on a major railroad project in the United States was during this installation in July 2019, according to the MTA.

The new Port Washington Substation replaces an earlier brick-and-mortar substation that had been in service more than 30 years and was beyond its useful life. Located at the intersection of Davis Avenue and Bayles Avenue, the new substation ensures the continued reliability of Port Washington Branch train service by maintaining a robust power system for the electrified third rails. With greater capacity, the new substation enables the anticipated growth in train service that is expected to coincide with the start of LIRR service to Grand Central Terminal.

Nassau Switch in Mineola is one of the most highly trafficked areas with over 200 train traverses every day. The switch installation, which allows trains to be guided from one track to another, was upgraded over several weekends this past fall to prepare for the future third track between Floral Park and Hicksville as part of the LIRR Expansion Project. These switch upgrades, among many other initiatives, have resulted in 43 percent fewer cancellations, 22 percent fewer short trains and 30 percent fewer trains delayed over 15 minutes.

Looking ahead at LIRR Expansion in 2020