Covert Avenue in New Hyde Park reopened to traffic on schedule after six months of construction. 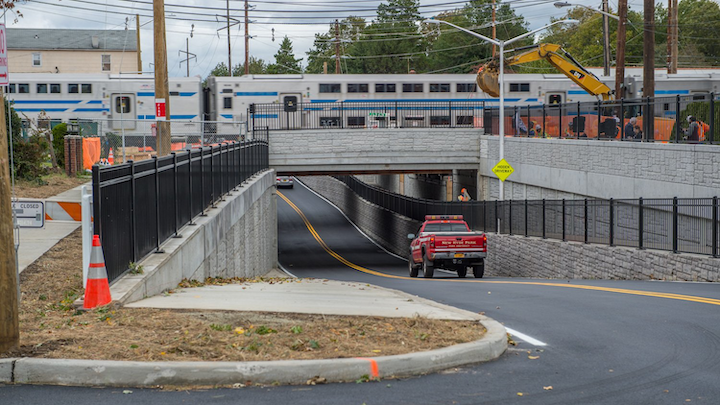 Covert Avenue in New Hyde Park is the second of eight roadways to have the Long Island Rail Road (LIRR) grade crossing be completely eliminated through the LIRR Expansion Project, with the roadway reopened to traffic on schedule, according to an announcement from New York Gov. Andrew Cuomo.

Most of the crossings, including the one at Covert Avenue, are being transformed into underpasses, which enhance railroad safety, improve traffic flow in communities of Nassau County and reduce localized nuisances from horns and bells.

"Grade crossings have the potential to be extremely dangerous for drivers and LIRR passengers alike, and we've made a concerted effort through the LIRR Expansion Project to remove the ones that aren't absolutely necessary," Gov. Cuomo said. "These upgrades are part and parcel with our ongoing mission to reduce frustrating delays and help ensure New York's transportation infrastructure is capable of supporting our 21st century economy."

The Covert Avenue crossing had been closed to traffic on April 15. The new bridge was put into place during the weekend of Aug. 24-25 using an approach called box-jacking that reduces the length of time the tracks must be taken out of service to just one weekend.

Under this approach, workers built a 140-ton concrete structure onsite that includes the rail bridge, the 40 feet of roadway beneath the bridge and the side walls connecting roadway below with rail bridge above. They then used hydraulic jacks to inch the structure into place.

"With each grade crossing that is eliminated, our railroad gets safer,” said LIRR President Phillip Eng. “Our efforts to improve safety and reliability through the LIRR Forward Plan are reinforcing the work being done along the Main Line to eliminate crossings and expand and modernize our infrastructure."

The roadway reopening is the fifth major bridge or grade-crossing project to be completed over the past 18 weeks along the LIRR's Main Line as part of the LIRR Expansion Project. On June 1-2, the Metropolitan Transportation Authority (MTA) replaced the LIRR's Cherry Lane Bridge in Carle Place, and on Aug. 17-18, crews added a new bridge over S. Tyson Avenue in Floral Park. On Sept. 5, crews reopened Urban Avenue in New Cassel, replacing a previous at-grade crossing. Crews replaced the LIRR's 108-year-old Nassau Boulevard Bridge in Garden City Oct. 5-6.

"The LIRR Expansion Project is moving forward at an extraordinary pace, which is why it is the model project for how we are changing the way we manage large capital projects to do them better, faster and cheaper,” said MTA Chief Development Officer Janno Lieber. “We are keeping this pace up over the next 35 months because we have four more bridges to replace and six more at-grade crossings to eliminate in that time."

MTA says eliminating railroad crossings improves safety. In the decade prior to the start of the LIRR Expansion Project in 2017, six fatal accidents took place at the crossings along the Main Line between Floral Park and Hicksville.

This location will now have reduced noise emanating from horns that are required to sound in the approach to a crossing, and the bells that sound as crossing gates come down to block roadway traffic. Along the LIRR Main Line, crossing gates during rush hour are in the down position up to 35 percent of the time, creating traffic backups and increasing exhaust from vehicles.

The other railroad crossings that will be replaced by underpasses as part of the LIRR Expansion Project are at New Hyde Park Road in New Hyde Park, School Street in New Cassel and two at Willis Avenue in Mineola.

Heavy construction on the LIRR Expansion Project began in fall 2018 and will add a third track from Floral Park to Hicksville, reducing train congestion and delays, enabling true bi-directional service during peak hours for the first time in LIRR history. This transformative project includes several related elements, including the construction of additional parking garages and improved station access, retaining and sound attenuation walls and renewal of rail bridges. Construction is being handled in a way to minimize the impact on daily routines, with extensive mitigation and public outreach efforts being planned in conjunction with local communities.

The LIRR Expansion Project is part of a multibillion-dollar modernization of the Long Island Rail Road, the largest investment the railroad has received in decades. Once the work is complete, the LIRR will have increased its capacity by roughly 50 percent. Together, the upgrades will help transform transportation across the region and provide a reliable, state-of-the-art rail system for Long Islanders.