A look into various rail infrastructure projects throughout Europe reveals the challenges of working with historic sites, meeting the public’s needs and expectations and increasing capacity while managing project costs. 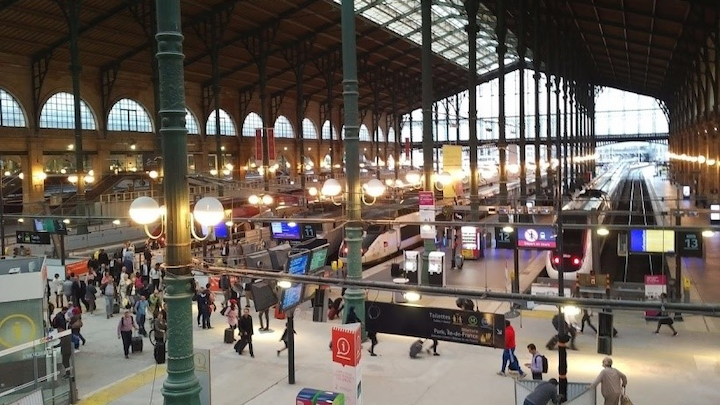 Inside the Gare du Nord station in France.
Giles Bailey

There is a broad focus on sustainability and improving public transport throughout Europe. This includes within cities, between cities, cross border transport to link regional and national markets together and for the freight market.

There are several key strategic issues for European policy planners in terms of mainline rail infrastructure. These include making rail travel more compelling and particularly more competitive with air travel for medium distances; decarbonizing the rail industry; creating capacity to grow the rail freight market versus passenger travel; and improving the urban realm around rail stations to improve their attractiveness, functionality and multi-modal capabilities which includes other public transport, ride and car sharing, as well as micro-mobility.

There are numerous examples of how major rail hubs are being modernized, rebuilt and focused not only on efficient and attractive rail transport services but also being used to  create civic focus on sustainable, multi-modal urban mobility.

An example of the latest thinking in terms of mainline rail interchanges is seen in the reconstruction of London Bridge Station in central London. The station is one of several main stations encircling the main business districts – in this case, catering to rail travel from across south and southeastern England including local commuter districts. The original mainline station opened in 1836 and currently handles more than 50 million passengers per year.

The station had become an incoherent, inefficient and unpleasant gateway to London following decades of reconstruction, additions and updates. As well as being on the London Underground network, it is unique within the city for having an exceptionally heavy pedestrian flow of peak period commuters choosing to walk across London Bridge into the office district on the north side of the River Thames.

Starting in 2009 and as part of the expansion of the Thameslink cross-London rail scheme, which brings 24 trains per hour through a historic rail tunnel from south to north London, London Bridge station has been effectively replaced. Half of the station was closed, removed and rebuilt over two multi-year closures. Much of the previous pedestrian infrastructure has been rebuilt as well as the technical control systems and the capacity of the station enhanced. Many of the historic features have been reused, but much was  removed. The work was completed in 2018.

There are numerous features of the station, including:

Belgium has recently seen significant investment in renewing its extensive rail infrastructure. The country experiences some of the most congested highways in Europe as a result of the  industrial economy, population density and being at the center of many key trade routes. However, key rail stations had become outdated and unpleasant to users and this was impacting its ability to meet plans for the increased use of sustainable modes. A clear example of this was the  state of Brussel’s Gare du Midi station when the Eurostar services from London started operating in 1994.

Significant funds have been spent over the past decade in improving the state of the nation’s railway stations as well as using this investment to return rail stations to being places of civic pride and intermodality.

Among the most notable example is in the city of Liege, which is in the eastern part of the country near the German and Dutch borders and is a city of 700,000 people. A functional station at Liege Guillemins, which was rebuilt following the  World War II, had become run down. Rather than only consider function in its reconstruction, it was used as an opportunity to assist in the repositioning of Liege following a  period of industry decline and adjustment.

The result, which opened in 2009 and was designed by architect Santiago Calatrava, cost approximately €300 million (US$330.68 million), is visually appealing. The station is on the main high-speed route to Germany. There is a second large city center station which is nearer to the shopping quarters in the city center. However, the Liege Guillemins project has created a civic focus, multi-modal interchange and is part of a pending light-rail scheme across the city. This  work and local redevelopment has taken some years to progress and the station can at times seem to be somewhat isolated in the urban fabric, but it provides bold focus for using rail infrastructure to redesign and refocus urban activity.

There are numerous other examples of the use of rail station redevelopment in Belgium including at Mons, Antwerp and Leuven.

Heading north from Belgium, the Netherlands is facing a number of challenges in delivering sustainable transport. Demand for public transport, and particularly rail travel, is increasing and this is creating strains on the rail infrastructure. The freight market, particularly from the coastal ports to Germany and Switzerland is also increasing. Furthermore, public policy is growing the cycling market and creating the need for thousands of additional cycle parking spaces and associated infrastructure at multi-modal hubs.

Examples of contemporary thinking in rail station design in the country include the  air/rail interchange at Schiphol airport south of Amsterdam. However, one of the recent interventions is seen at Rotterdam’s Central Station. Within the country’s second largest city and part of  one of the largest urban regions in Europe, the Randstad, the station was again rebuilt in the modernist style in the 1950s. While functional for a few years, it was not meeting contemporary needs.

Rather than a functional update, the replacement Rotterdam station is visually appealing and used by 100,000 people each day. As in most European cities, the central station is the urban focus linking business, shopping, culture and entertainment.

What is most impressive about Rotterdam’s railway station is the iconic design in an already modern city center; the creation of improved pedestrian spaces which link the city center’s other functional areas; as well as through the burying of some of the access routes to the station from the south to create increased public space in the city center and remedy some of the urban design faults in the post war reconstruction of the city. And finally, the need to accommodate cycling on a mass scale. It is not unusual for the modern Netherlands and Utrecht and Amsterdam stations to now contain these types of large-scale facilities. While supporting the policy goal of cycling use, the station design has limited the impact of cycle parking on the surrounding public realm by providing efficient and available subterranean parking for 5,000 bikes – which is also free. This also allows for easier interchange with the surface trams as well as the Metro system.

Rail demand is also growing strongly in Germany and this is creating a pressing need for more capacity in terms of services and infrastructure. The German government says it is committed to addressing its sustainability commitments via improved public transport, including rail. Public transport in the country is already generally  good, but numerous schemes are in development. In addition, and typical of the desire to encourage use of these services, the government has agreed to lower VAT (sales tax) on rail services in 2020 and effectively cut all long-distance rail prices by 10 percent.

As part of the investment in improved infrastructure, Stuttgart, the major city in the southwest of Germany and a major rail hub, is rebuilding the main station from a stub-end to a through station. The work is  controversial in the region due to its cost - over €6 billion (US$6.649 billion); need for over 30km (20 miles) of new tunnels and a new underground eight through-track station; the length of time for the work – the main phase is expected to be completed in 2025; demolition of large parts of the historic station; and disruption to the city center – the existing station has largely been demolished while a new station is built below it and at 90 degrees to the previous station.

Railway stations in Germany can be valuable and lucrative retail destinations as laws restrict Sunday shopping to these locations.

The reconstruction of Stuttgart’s station will enable a recast of the transport network in and around the city. There will be an  increase in rail capacity and particularly reliability for travel across the wider region, including services to and from France and Switzerland as well as to Bavaria within the country. The project will also allow more effective use of high-speed rail assets leading to the city. The city’s extensive light-rail network, which is focused on an interchange at the station, will be enhanced via improvements to dated 1970s era public realm around the station with better links to the adjacent city center retail and business districts as well as newly developing districts on former land behind the existing station.

The disruption and controversy of the new rail intervention in Stuttgart has been substantial, but it is symptom of the need for improved mobility in a modern Europe.

Meeting the needs and expectations of many stakeholders in Paris

Finally, Paris illustrates several of the challenges of meeting the demand for rail infrastructure in a highly congested and historic city center. Gare du Nord is the busiest rail station in Europe with over 200 million annual users and among the busiest in the world. It is one of several mainline rail stations that ring central Paris and particularly serves northern France, Belgium and Eurostar services to London, as well as suburban rail services which terminate at the station as well as are part of the RER. It is also a focus for Metro, bus, taxi, rideshare, cycling and micro-mobility activity. All of this occurs within a densely populated urban fabric.

Nevertheless, Gare du Nord needs to expand to meet the growth in activity in the city as well as support further use of sustainable transport. The owner of the station complex, the state railway operator SNCF, had proposed a significant redesign and expansion that would also make use of the intense pedestrian footfalls to increase the amount and quality of the retail offer in the station. Daily capacity would increase to 900,000 passengers and significantly increased public space was proposed as well as a new bus station. The work was meant to be complete in advance of the 2024 Paris Olympic Games. However, the complex overlapping views of the role and future of such a key infrastructure asset did not allow for the numerous interests to be adequately convinced of the proposed plans within the limited time before the games. Earlier in 2019, the proposals were postponed by SNCF following a negative report from a key planning oversight body of the French State.

While the complexity of the planning environment is typical of most of the key rail infrastructure projects being developed across the continent, the Paris example is illustrative of the public focus, concern and challenge of meeting the numerous needs and expectations of a modern multi-modal railway hub in a European context.

Giles Bailey is a consultant at Stratageeb Limited.